‘Leave no-one behind’ is the deceptively simple goal used to sum up the UN ‘Sustainable Development Goals’– a grand plan for a better world for everyone – signed off by member countries in 2015.  It’s a hugely ambitious framework aiming to make the planet and its people prosperous into a secure future. With seventeen goals and 169 targets to be achieved by 2030 it seems likely to launch a whole industry of monitors and evaluators trying to figure out what progress is being achieved.

But how about looking a that one overarching goal? I’m doing some work on how this global framework reaches down to national, regional and local level, making a difference to peoples’ lives. Last week that took me to Manila, capital of the Philippine islands. While I was there I was fascinated to see what it means to leave no-one behind.

Manila is a good place to ask the question, as cities like this are taking over the world. More than 50% of the world’s population live in them, 68% projected by 2050. 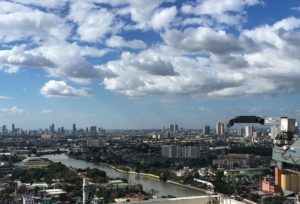 Cities experience growing pains, and one evidence of that is over a billion people across the world living outside the regular systems and formal economy, unregistered, bartering, unable to vote, lacking basic services, in the ‘informal sector’, many in the slum areas of cities. Shanties and shacks are jammed into the pockets of land no-one else wants, next to swamps, rivers, dumps and other low-value sites, scraping a living as more and more migrate to the cities from poverty-stricken rural areas in search of work. 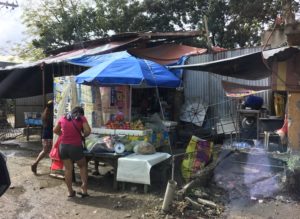 Manila is capital of a country sometimes referred to as the world’s ‘disaster laboratory’, striken by regular typhoons and straddling a fault which threatens ‘the big one’ – a predicted devastating earthquake above the ‘West Valley Fault’. Its government are well aware of the need to protect their people. Most recently Typhoon Haiyan devastated huge areas of the country,  concentrating minds even more on keeping its people safe. The city’s investing huge amounts in Disaster Risk Reduction to protect people from these oncoming disasters.

Take the lift up one of the city government’s high rise offices to a disaster control  centre and you’d be forgiven for thinking you’d walked onto the set of a Tom Cruise sci-fi film. A huge wall of monitors beams data into the control room. Staff dressed in black and orange emergency gear scurry around. We’re shown a battery of films shot from swooping cameras and drones depicting emergency vehicles, equipment and drills. There’s a lot of machinery here. The music is fast and techno. 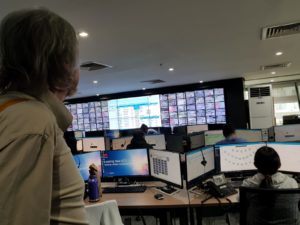 What’s the answer to our question? Is no-one being left behind? The city is clearly spending big money on protecting its citizens . . . But which citizens? As we drive through the city we see clusters of skyscrapers. Business buildings, condominiums. The pressure on the land is tremendous. There are cranes everywhere, new blocks rising into the sky. In between this slick high-rise development is a very different kind of city. Cramped clusters of shambling buildings filling in spaces and straggling along the rivers, jammed together, clad in wood and tin. This is the informal sector. This is where many people are in danger of being left behind. Do the sophisticated systems and control centres take these people into account? It’s an important question as it’s estimated that a million people live in these areas of Manila Bay, and it’s well known that – lacking proper buildings and services – they are the most vulnerable to disasters both large and small.

The answer we are given is simple. These people are being moved out. Relocated. That’s not surprising in simple economic terms as they are squatting on land which has now become valuable, where the next high-rises could be built. Relocation solves a problem for the city, but does it solve the problem for them? Even the people explaining this policy say no. Plucking people out of their established homes doesn’t only take them away from what they know, it takes them away from their income. Whatever work they have is where they live and when they are moved out of the city, maybe to the mountains, they are not only emotionally but economically dislocated. The people who explain this policy recognise this problem. But they didn’t have any suggestion about how to address it.

A whole industry of consultants and accountants may be making good money from sophisticated evaluations of progress on the 169 targets of the sustainable development goals, but a much simpler evaluation of the overarching goal – leave no-one behind – suggests that this may not be high on this city’s agenda. I’ve seen and heard similar stories in other megacities: Delhi, Cairo, Ho Chi Minh City.  ‘Leave no-one behind’ is a wonderful aspiration. The reality in many countries is ‘Leave them out’ or in my own home country, the UK, ‘Keep them out’. Disaster Risk Reduction and Resilience are taken seriously, but shaped towards the wealthy middle classes and the business sector, whereas those most vulnerable to disasters are the poor.

How will the UN square this circle? My own experience from years working on  alternative community assessments of progress is that by making the targets,  indicators and evaluations sufficiently complex not only can you finance an industry of well-paid consultants and economists but you can throw up a smokescreen of complex reports and metrics so no-one notices the lack of progress towards the underlying goal.

To end on a positive note we went to another Philippines city and talked to a member of the city council’s housing committee about their approach to those living in the shacks and slums of their city.Their solution? They’d bought up a disused cemetery and were in the process of building 600 houses on it to accommodate many of the slum dwellers, within reach of their old homes. Leaving no-one behind is possible. Leaving people out is easy.

Terry Gibson is a writer and researcher focusing specifically on community development and the role of non-governmental organisations. His book ‘Making Aid Agencies Work: Reconnecting INGOs With the People They Serve’ is published in July: Pre-order and save 30% with code INGO