If learning is so important why don’t we?

In the worlds of academia, business and international development there’s a strong emphasis on learning, but does this enable us to change and improve, or just train us in ‘business as usual’?

Whilst setting up my ‘inventing futures’ website my Mac laptop threw error messages and Apple directed me to the ‘Genius bar’ at my local Apple store (how’s that for product placement?).

Oliver, my allocated Genius, plugged my laptop into their mainframe, scratched his fulsome beard, and concluded the error message was an error. Whilst he was doing this he was constantly dealing with quick requests for advice from his fellow Genies, and also seeking bits himself. He also pointed out a manufacturing fault on the laptop screen and so he logged in my contact information to  arrange replacement. Noticing my email address he asked ‘inventing futures – what’s that?.’ I said ‘it’s about creating knowledge which you can use to do things differently and better.’ ‘How do you create knowledge?’ he asked. Looking round me I answered ‘While you checked out my laptop you’ve been constantly sharing information and giving information to each other. It’s not in a manual, it’s stuff you’ve learnt on the job. You and your fellow Genies are creating knowledge.’ Oliver was quite struck by this and said he’d go off and check out the site. It didn’t seem to have occurred to him that they were knowledge creators.

What went on at the Genius bar is a small glimpse of the potential of people to create knowledge. It has the potential to happen in many different worlds, and yet in my work in International Development and my earlier work in Corporate Communications I have been told by many people that teaching and training just reproduce the way it’s been done already, and in doing so tend to make those taught and trained think it’s impossible for them – like Oliver and his colleagues – to create new knowledge and understandings. I’ve started writing a paper ‘If learning is so important, why don’t we?’ influenced by a colleague in Uruguay saying that people facing poverty in her country suffer from ‘Learned helplessness’: in other words the usual style of learning and training specifically leads to  acquiescence to experts and teachers, a resignation to the status quo, and a lack of self belief in the ability to learn how to influence and change their situations. If you can’t wait to read the forthcoming paper try out ‘The importance of critical thought for change agents’. If you disagree, agree, or want to know more I’d love to hear from you.

What  ideas, methods and experience form the basis of  Inventing Futures?  How can they be applied in practice?

The Inventing Futures Cookbook is being developed as a way of answering those questions by Terry Gibson with designer Mike Thorpe, using an accessible infographic approach. 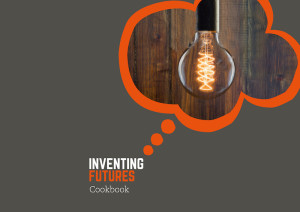 It contains background, ideas and methods to be applied by groups, communities, organisations and individuals to invent new futures. Anticipated publication date is September 2016 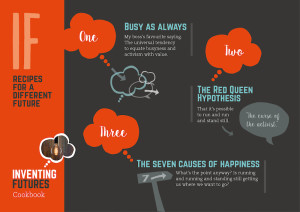 Do you ever feel that you’re running and running and in reality you’re standing still? You might reach a Friday evening after a busy week and think ‘what’s that all about?’ or you may look back over a more distant horizon, several years of your life, and wonder whether anything’s changed. A Tanzanian leader I respect said to me once that after a quarter century working in a poor region of Tanzania leading a development agency he wondered if anything had really changed. If it matters to us to make a difference then we need ask a few questions. Stop a minute and think  . . .

. . . ‘Reflective Practitioners’ is a term coined by Donald Schon in a book of the same name to talk about the fact that practitioners – people doing professional or practical jobs – ought to build in reflecting on what they’ve done, learning from it, innovating, inventing and doing things differently. Apologies for the ponderous term, which is really describing ‘learning from experience’ or ‘learning on the job’; ‘inventing futures’ in fact.  He wrote the book because he thinks very few people do this. Ring any bells? If it does here’s a piece I wrote for a lecture at a South African university to a whole bunch of development workers. Whilst it’s for a particular audience it applies much more widely.

I’ve realised more and more that knowledge – useful knowledge we can use to change things – is a confidence thing. It’s not about ramming lots of facts into ours, or anybody else’s heads, its about developing the confidence to create and  use knowledge.

Here’s an illustration to show you what I mean. On one of my overseas trips I went to the Mosquitia rain forest of Honduras in Central America – the mosquito coast. The people living in the forest, the Misquito Indians, faced the problem that their habitat was being destroyed by American logging corporations cutting down the valuable hardwood. This carried on partly because the Honduran government was short of cash and turned a blind eye and partly because the locals had no legal rights to their land. A local development organisation figured out that if they could help them get legal rights they could defend their land. The problem was that not only did the locals not understand law, they were mostly not even literate. The organisation worked with one group for a year or more until they finally succeeded in getting deeds to their land so they figured it would be a good idea to share this learning. They filmed it and shipped a video player upstream on a dugout to another village with the idea of learning from the video case study so they could do it in the second village. What they told me was that more than the practical information in the film the villages said when they saw it ‘they are people like us and they did this so we can do it too’.

What this reveals that learning from experience, innovation, invention is all about confidence. As people take the first steps into reflecting, thinking, questioning, developing new ideas, experimenting, trying them out, they start to move from being passive – what a collegue in Venezuela called learned helplessness – to confidence and action. I’ve seen this happening in Ethiopia, in Cambodia, in Bangladesh, and around where I live. Just taking a small step based on this and realising that they’ve taken their own initiative build confidence to take the next step, to go the next time round the circle.

People coming out of paid-for private education often have that confidence thing. Top private schools produce better academic results than their state counterparts but alongside the smaller class sizes and other benefits what you see – when you look around at the predominance of privately educated politicians, business people and so on – is that aura of confidence. My Mosquitia story showed how people with no education at all, let alone a private education, got that same confidence from seeing that they, and people like them could learn and act.