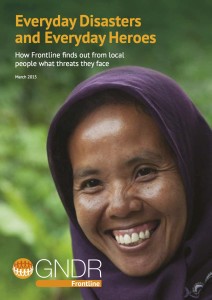 As programme lead on the Frontline (and earlier ‘Views from the Frontline’) Programmes at GNDR I found a unique opportunity to apply my concern for increasing the influence of the voices and knowledge of the poor; a concern which developed during 15 years of documenting development in urban and rural communities in the developing world. The programme, launched in 2008 as I joined the network, reached out through GNDR’s member organisations to thousands of individuals in communities across the world, consulting them on progress in reducing the impact of disasters on their lives. To date the programme has consulted over 100,000 individuals in 70 countries, based on a collaboration with over 600 organisations. The results have had an impact on learning, action and change in local communities. They have influenced the policies and practice of national governments. They have contributed to the shaping and implementation of international frameworks.

After setting out to capture some ‘best practice’ stories of ‘corporate social responsibility’ in a large multinational working in many emerging economies we immediately realised that without robust reporting of performance across the global business the individual anecdotes weren’t very helpful. This led to a major project to install a system to allow self-reporting and clear presentation of the performance of the 35 businesses across ten key trends. While this in itself doesn’t immediately appear to be about learning and change, what has become clear is that in fact the data which is gathered and presented is part of the knowledge of the emerging ‘community of practice’ at this business. The practitioners became very excited about monitoring both their own ‘scores’ and those of other businesses. While this is partly about the competitive culture of SABMiller, it is also about ‘learning from difference’. What I mean by this is that not only the things community members share in common (which give them their identity) but the diversity in the community drive communication and learning. This is also clearly leading to change as the diversity drives practitioners to investigate how their colleagues in some case achieve better performance than they do. What may seem to some a ‘beancounting’ exercise is driving change

‘On Solid Ground’ Participative video production to learn from response to Hurricane Mitch: 2001

I’ve made a large number of films in the South and when I was asked to consider making films to capture the learning and experience of local NGOs responding to the Hurricane Mitch disaster in Central America I felt it was time to do it differently. I proposed that I trained local people to gather the material (for a start they speak Spanish!) and that’s what they did.

Most significantly the people I trained went on to train other people, some at local community level. Modern technology is very forgiving and with relatively simple rules people were set free to tell their stories. Like much ‘participative’ video this depended on ‘outsiders’ to edit the material.

Developing sustainable supply chains at B and Q: 1999

The project which engaged me with ‘Corporate Social Responsibility’ was an event for B&Q’s suppliers, for which the intention was to demonstrate the impacts of supply chains reaching deep into the south. Because of my long experience of filming in the South I got involved. The story traces Capiz lampshades back to the small units in Manila where they are manufactured, and from there back to the shellfish beds off the Philippine islands where the raw materials are obtained.

The supply chain is fascinating because it relates to issues such as sustainable extraction of shells, health and safety for local divers, working conditions and health and safety in the manufacturing process, and development of designs which will enable the lampshades to sell in quantities which sustain improvements in the chain. The videos we created helped to stimulate the debate, but also showed how the engagement of all those involved was critical. In more recent work with B&Q and Kingfisher we’ve emphasised stimulating learning from peoples’ own ‘peers’ – ‘horizontal learning’